We’d hoped to attract hummingbirds to our home, and dutifully set out bright red feeders.  And indeed, after a short while,  species of hummingbird indigenous to the Pacific Northwest began to frequent our yard.   It wasn’t long before we realized that not just a handful of hummingbirds lived in our area…….a veritable flock of hummingbirds would arrived throughout the day to feast.   Especially in late afternoon, we’d often attract 30 or more hummingbirds to the 3 feeders we had set about the yard.  At times it felt like we needed an air traffic control monitor as these feisty little critters dive bombed each other for access to a feeding perch.  Good luck if you happen to be in the line of fire……more than once these tiny balls of fire whizzed by inches from my face.  it was great fun trying to photograph their antics.

Fall approached, and then one day about a month ago they were gone.   As if a horn sounded,  they all seemed to pack their bags and head south for the winter.   All, that is, expect for one hearty pair of Anna’s hummingbirds (Calypte anna ) with beautiful iridescent red neck plumage.  After a gorgeous and relatively dry October, we are now into full blown drippy Fall weather.    Its foggy and damp outside, yet two persistent hummingbirds have decided to winter over.  Everyday, nearly all day, they perch at the tip of a nearby fir tree, standing guard.   And while I think they are a breeding pair, they will dive bomb each other should one decide to approach the feeders.

I feel responsible for these birds now.   They have apparently committed to guarding their food source all winter.   Unless it is pouring, there they are, standing guard over their food………perhaps relieved that everyone else has left.   Yesterday, I decided to put fresh food in the feeders.   Under their watchful eye, I brought the feeders inside, cleaned, refilled them and then hang them back out on the deck.  No sooner had I turned by back when a little fire ball whizzed by……giving notice that I had entered their territory.    I will persist as long as they do.    Should be an interesting winter. 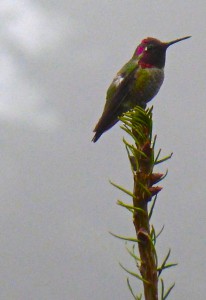