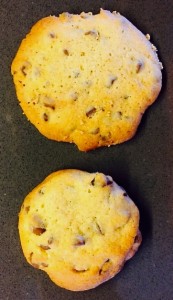 Its Christmas Eve and I thought it a fine idea to bake.  Mind you, I don’t bake very often and am not particularly good at baking, but chocolate cookies are my absolute favorite.  Why not spend a bit of time making my favorite cookies??!!

I remember my Grandmother baking for days as as the holidays approached.   She love making all sorts of traditional foods, but loved being on the lookout for new cookie recipes.   Her favorite was the always the recipe found on the package of Nestle’s Semi-Sweet Chocolate Morsels.   Warm cookies were the best treat of all….soft, still hot even, with the chocolate warm and gooey.  Somehow I’d always manage to come around just when her trays of cookies emerged from the oven.

A trip to the grocery store assured I had all the needed ingredients……..flour, butter, eggs and the all important chocolate morsels (which are very susceptible to being eaten right out of the package before they ever make it into a cookie).  I measured and stirred and wah-lah…..a batter……but an oddly thin batter.   As I baked the first batch, but the cookies spread themselves across the baking sheet as if they were trying to be one with the oven.   Odd, very odd indeed.  The cookies browned nicely, but they were very thin and somehow wrong.  I couldn’t even remove them from the tray.  The cookies were suffering from “fragile cookie syndrome”.   Consultations ensued.  Did I measure incorrectly?  Always a possibility but I had used actual measuring cups.  Was it the wrong kind of flour….bread flour rather than all purpose flour?  Could be.   What about the eggs?  I had used jumbo rather than large eggs.  Maybe they were making the batter too runny.

To rescue the batter we added more flour…..rather a lot more flour.   Seemed like a good idea at the time and the batter did thicken somewhat.   But alas, I still ended up with thin, oddly fragile cookies.

Fortunately, the next batch fared much better.  It turns out the butter was the culprit.  I had simply used too much butter.  But how??   I had indeed read the recipe……it said “two sticks of butter”…..   I can certainly count to two.

I then read the recipe more carefully.  It says, “1 cup or two sticks of butter”.    I know what a stick of butter is.….or so I thought.  It turns out that in the Midwest where I grew up, a “stick of butter” is long and skinny and equals 1/2 a cup.  There were 4 skinny sticks in a pound of butter.  But here on the West Coast, butter is different.   There are still 4 sticks to a pound, but they are fat, squat sticks and not at all what I was used to.  Turns out there is a history to skinny sticks verses fat sticks of butter.  It has to do with there butter is processed and the kinds of machines they used to create “sticks”.  In the Eastern US, these machines make skinny sticks but there are differences in the machines that process butter in the Western US.  Sticks of butter are wider and much shorter, but still 1/4 pound of butter each.    I had assumed that one needed two of these fat, squat sticks of butter to equal an East Coast long, skinny stick.   Wrong, very wrong.   Both are exactly the same amount…..1/4 pound of butter.    So I had blightly put TWICE AS MUCH butter into my chocolate cookie batter as was needed.

Sigh……mystery solved.    The next batch of my favorite chocolate chip cookies came out exactly as expected.   And were gobbled up warm with gooey chocolate chips.    The fragile cookies are now looking rather forlorn, abandoned on the kitchen counter.  They are still fragile, and noticably greasy (ah, that extra butter…..).   I’ve been assured they will make a great crumble on top of ice cream.      I can hear my Grandmother laughing now………